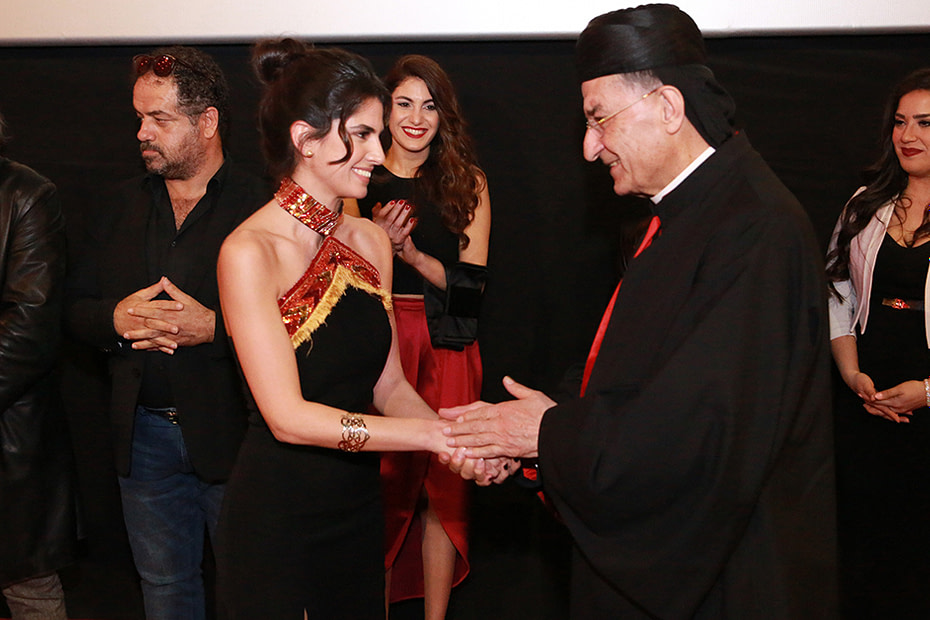 On Wednesday March 14, 2018, a special screening was held for Morine movie in presence of Patriarch Bchara Boutros Al Rai, courtesy of Grand Cinemas. The Patriarch honored all the actors and the contributors who made the movie possible. After the screening, we managed to get a word from the Patriarch, and he seemed to be more than happy with the result of the film. Fine Line Production & Network was there to cover the event.

After almost two years of constant hard work, Produced and directed by Tony Farjallah, Morine movie is the first Lebanese historical movie ever made, and the biggest individual production in Lebanon.

Lebanese actress Takla Chamoun Farjallah, one of the stars of Morine movie, as well as executive producer of the film, and wife of the director Tony Farjallah, told us all about the feedback she’s getting from the viewers.

Although the film is not in theaters yet, not until March 22 at least, the film has been screened by various social and religious NGOs. And despite all the screenings, including this special one at Grand Cinemas in Dbayeh in presence of Patriarch Bchara Boutros Al Rai, we learned that non of the stars have yet seen the film. The stars also told us about the feedback they have been getting from the viewers.

Despite the fact that non of the stars saw the film, one in particular has. He is non other than Morine movie’s Director of Photography Pol Seif, who also did the color grading of the film alongside with the amazing Loup Brenta. And boy did Pol tease the actors!

Morine, portrayed by Carmen Bsaibes, lived in the 7th century, around 620 D.C, a time where women were not allowed to do any religious deeds, not even serve the mass.

Raised by her grandfather, played by Mounir Maasri, pastor of their village, after her mother’s death during birth and her father’s disappearance, Morine’s curiosity drove her to learn everything from him in secret, including how to read and write, the language of ancient Levant, preparing for Ash Monday and the Lent. Morine grows up to serve her grandfather and the church, finally wanting to enter the monastery, even if she had to pretend to be a man for the rest of her natural life.

The movie sheds the light at the battles the saint had to fight, and the many conflicts she had to face, mostly false accusations showing how women can serve God just like men can, and maybe even with more affection and dedication, willing to sacrifice anything so she can follow the path of God.

The actress of the main role in the film, Carmen Bsaibes, portraying Saint Morine, told us the story of the film in brief.

A significant part of the film was shot in a village built by Byzantine era specialists for the shooting in Nakura, South Lebanon, simulates every condition of an international production, with a really well written storyline and exceptional acting talents from the cast that we can see in many powerful shots and scenes that embody the mentality of the people at that era.

Tony and the crew made sure that every single detail gives the viewer the vibe of the 7th century, from costumes to makeup to cinematography, which make the viewers feel like they’ve traveled in time and joined the actors who were very professional, fighting hard conditions from heat and dust in Nakura to extremely low temperatures and snow in Qannoubine Valley, even staying on sets for days in order to make every scene real and every feeling honest.

To sum it up, Morine movie proves that with hard work and dedication, we may be able to break the stereotype of Lebanese cinema, taking it to a whole new level, and a step closer to worldwide productions.

It’s a movie not to miss, hoping it may make it worldwide, giving every ambitious actor and filmmaker in Lebanon a push to pursue their dreams no matter how hard or far they seem. For more on the film, visit the official movie website here